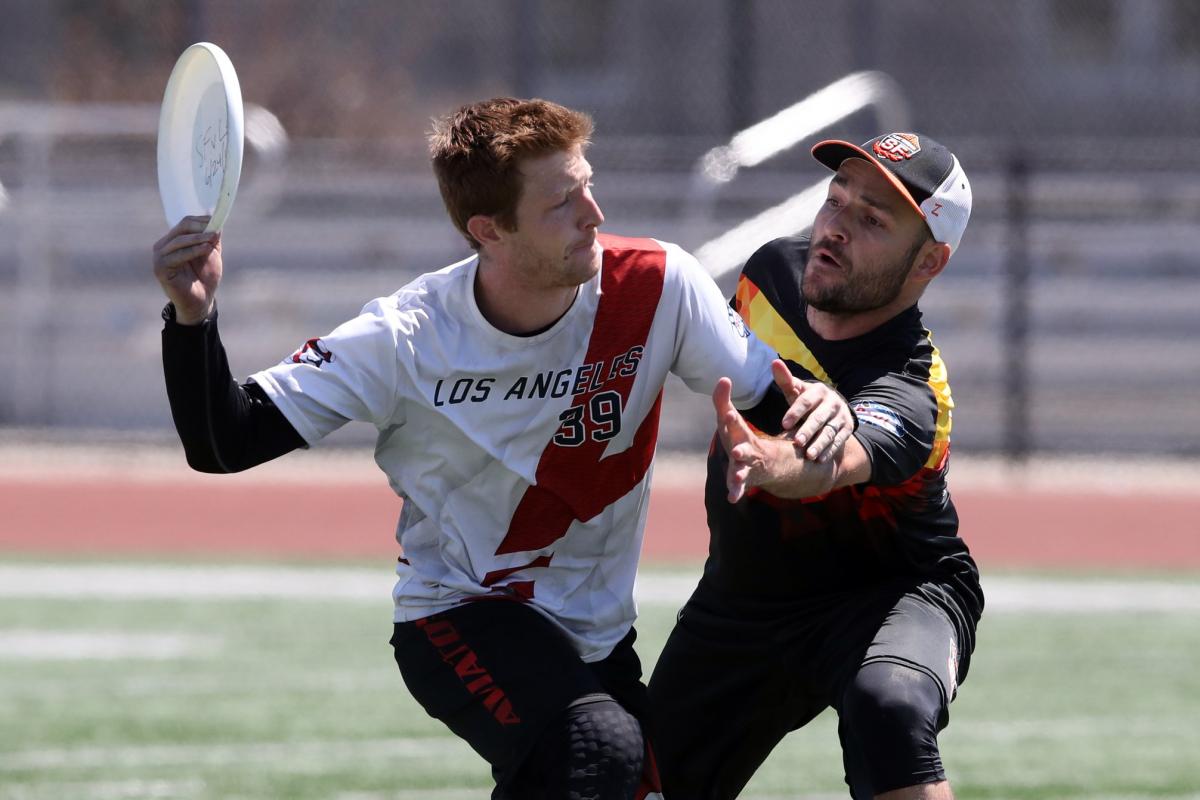 This is one part of a series of primers to introduce all four teams at 2018 AUDL Championship Weekend. Primers for: Dallas Roughnecks, Madison Radicals, and New York Empire.

The Los Angeles Aviators are continuing the proud tradition of high-flying ultimate from the West Division. They’re happiest scoring in nine seconds or fewer. The Aviators breezed through their divisional competition throughout the season, but they lost both games played outside of the division. Dallas is one of the teams to have beaten the Aviators, and they’ll be on the other side of the bracket at Championship Weekend.

The Aviators like to huck. Mazur is the prime culprit, as the touch on his flick huck is among the best in the league. He can control the disc’s shape 80 yards down the field, like a puppet master with strings leading from fingers to disc. Los Angeles scores faster than any other team this year, with a huge number of offensive plays lasting three-five passes and under a minute.

“There's a lot of this team that reminds me of the 2016 Dallas Roughnecks,” said Mazur, when discussing how much talent the team boasted.

“Jesse Cohen, he's a stud,” said Mazur. “The most underrated offensive stud in the league. The guy can flat-out fly, has really strong throws, and in small spaces, no one can guard him. You get into the red zone, and good luck. You double-team him, and guard him in every direction, and he'll still get open. It's crazy.”

Mazur himself was a new addition this year, and he offers an element the Aviators frankly lacked in past years. Mazur has perfect downfield throws in practically any situation, and him slotting into the position of shot-taker for the Aviators slides all of their other weapons into the proper positions. In 2017, Beatty led the team in assists, with 54. Now Beatty is playing his most comfortable role as center handler, who can take shots, but isn’t required to. With Mazur comfortable as a lead handler, Beatty is also free to strike deep, which coaches shunned in past years.

George is long, with explosive closing ability due to his fearsome bids. Elbogen was injured in 2017, and he is only just starting to rediscover his 2016 form, when was named to the all-AUDL first team. McDougall leads the team in blocks, always able to reclaim it after an offensive turnover.

Awed by McDougall’s top-end speed, Mazur has spent the season testing his teammate’s ability to track discs overthrown by wide margins. McDougall has found ways to come up with throws he has no business catching, including a game-winner against the FlameThrowers late in the season that he caught in the middle of a pile. Even when defenders are able to get to the disc first, if they knock it down instead of catching it, McDougall will still find a way to dive for the tipped disc. His short-space acceleration is elite, allowing him to adjust his routes on the fly, even at full speed.

McDougall may boast the Aviators’ gaudiest counting stats, but Mazur is glue that makes the whole thing work. Mazur has the touch on his deep hucks that makes deep cutters like McDougall dangerous no matter where the disc is on the field. Mazur is capable shifting into the possession handler position, which allows Beatty to strike deep. Mazur’s disc skills lessen the throwing load from the shoulders of Elbogen, Lai, and others.

More than his on-field talent, Mazur’s leadership ability has profoundly affected the Aviators. He was named an assistant captain to the team only weeks after joining the roster.

“What struck me was his ability to lead a team,” said McDougall of his first impression of Mazur. “He had this certain personality where, when he would speak, people would listen. It's something that the Aviators don't really have in a player. We'll all talk, but Mazur has this ability to calm everyone down.”

The Aviators beat you in waves. They play two defensive lines, which means that their players are fresh towards the end of games. Though defenders like Zach Theodore and Jeff Silverman will frequently find time on both defensive lines, the Aviators are comfortable giving relatively heavy minutes to the bottom end of their roster.

Los Angeles is happy to play person or zone defenses, and they’re able to run so many different players because the top defenders on the Aviators are as skilled with the disc as any other team’s offensive players. Eric Lissner was second on the team in assists in 2017, and he’s been converted to a D-Line offensive fulcrum. Tyler Bacon has spent much of the year as an O-Line player, but at full strength, Bacon will likely get most of his playing time with the defense. Tom Doi and Eli Friedman are all-world talents whom coach Jamison Gorin likes to run on the defense.

The result is a ripple effect, whereby the Aviators’ defense will likely have more talent than an opponent’s offense. When Los Angeles had relatively complete availability and health against the Spiders in late June, their first defensive line boasted Bacon, Doi, Friedman, Lissner, Theodore, Andrew Padula, and Matt Theologidy. That’s an overpowered starting O-Line. That Los Angeles is able to roster those players as defenders is frankly unfair.