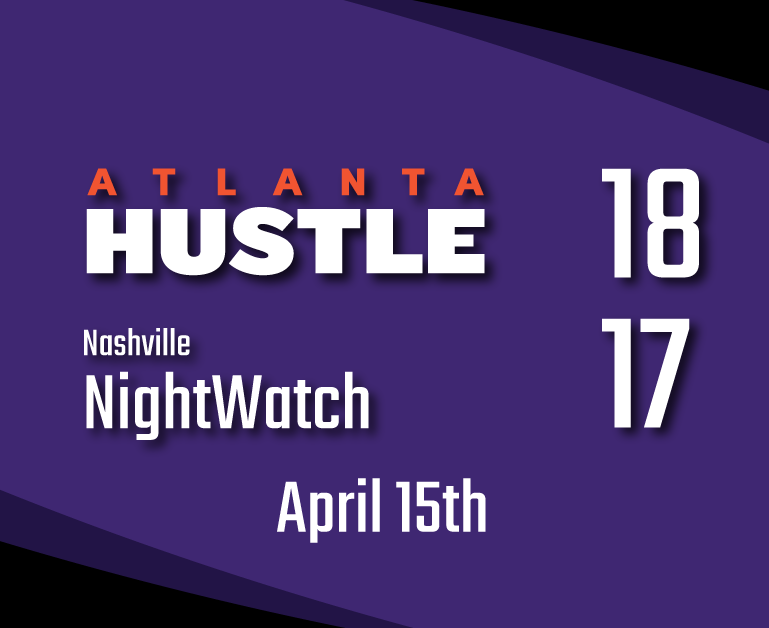 This game was scheduled for the day before. It was to be played after the Atlanta Soul played the Nashville NightShade. Due to forecasted inclement weather the game was preemptively moved to Sunday. The Soul were victorious in their first ever game 23-8.

The weather Sunday was overcast and chilly with a swirling light wind. 50F

The Hustle chose defense to start the game. They had a chance for first blood but could not convert the break chance. They would strike on their next defensive possession though when Karl Ekwurtzel bookended his block with an exciting layout score. ATL notched 3 breaks in the first quarter and the NightWatch hit back with a break of their own. The quarter ended 6-4 with Atlanta feeling like they could have been farther ahead if they converted a few more of their break chances.

The Hustle defense continued to generate NightWatch turns and they converted them into 3 more breaks. The Watch answered with back to back breaks of their own as the half was winding down. Atlanta surged to finish the quarter with a hold and a big break giving them a 12-8 lead.

The first point was 5.5 minutes long (almost half the quarter) in which ATL had 3 chances to score but the Nashville offense outlasted them. Seizing some momentum the NightWatch defense converted the next point for a break bringing the game into striking distance 12-10. Although there were some more chances for the Hustle defense both offenses held serve through the rest of the quarter and into the 4th. The score at the end of the 3rd was Atlanta 14 - Nashille 12

After 10 consecutive holds combined by both teams the NightWatch made their move. A Nashville defender jumped the passing lane to intercept a pass deep in Hustle territory. They converted on the short field to bring it within one, 17-16. On the very next point a cross field forehand from Atlanta late in the stall count bounced in the wind and was too much to handle. Again the NightWatch took over only a few yards from their goal. They punched it in for back-to-back breaks and tied the game 17s.

The Hustle were still in the driver's seat as they received for the 3rd consecutive point. The clock was winding down on Nashville. A score would maintain Atlanta's lead and allow them to put their defense back on field where it had been chewing up clock all day.

Atlanta tested the NightWatch on a long scoring attempt that was tightly defended. Nashville burned a timeout immediately after the turn, attempting to draw up a good play and get their best offensive personell on the field. Fortunately for the Hustle this also gave them the opportunity to stack their defense and get set as Nashville would bring the disc in play on the sideline with the whole field to go.

Taylor Minch, making his Hustle debut after moving to Atlanta this week, snatched an early Poulos pass out of the air. Captain Matthew Knowles dished it to Minch for the quick score giving the Hustle a one goal lead with :30 second remaining.

Thirty seconds is plenty of time to score in the AUDL. The NightWatch knew this and came out composed. They isolated a cutter deep and got a good huck up into the goal. Atlanta's Kelvin Williams played it perfectly, swatting away his 6th pass of the day. Williams was the game MVP at +10, 6 blocks and 4 Goals. 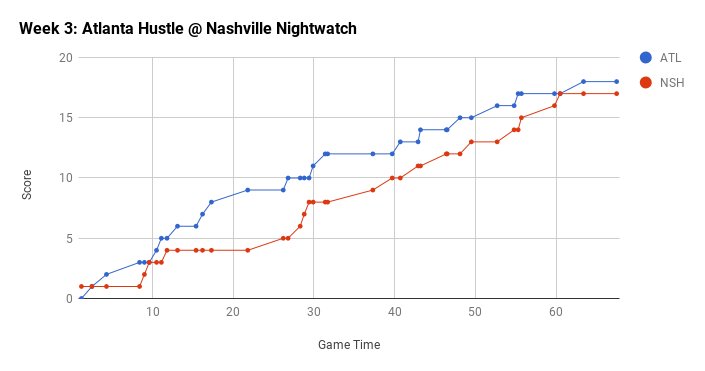 The Hustle defense is a real strength this year. In year's past Atlanta has been criticized for not generating a lot of blocks. This year the Hustle are getting the turns and when they convert they are deadly. If there is even a little bit of wind teams should be anxious about facing the Hustle and their toolbox of junk looks.

Coach Knowles was not able to attend the game after it was rescheduled and her presence was missed late in the game as Nashvillle mounted their comback. The NightWatch are a hungry team that has no quit in them. Nashville has a well run sideline trap defense that gave the Hustle offense fits in the 2nd half.

Next week the Tampa Bay Cannons come to Atlanta wounded at 0-3, looking to avoid falling farther behind a tough South division. That will make them a dangerous opponent for the Hustle's Home Opener - Saturday April 21st at 630pm at St.Pius X. Atlanta plays at home 3 of the next 4 weekends. www.atlantahustle.com/tickets 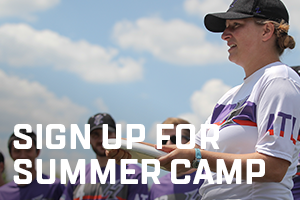