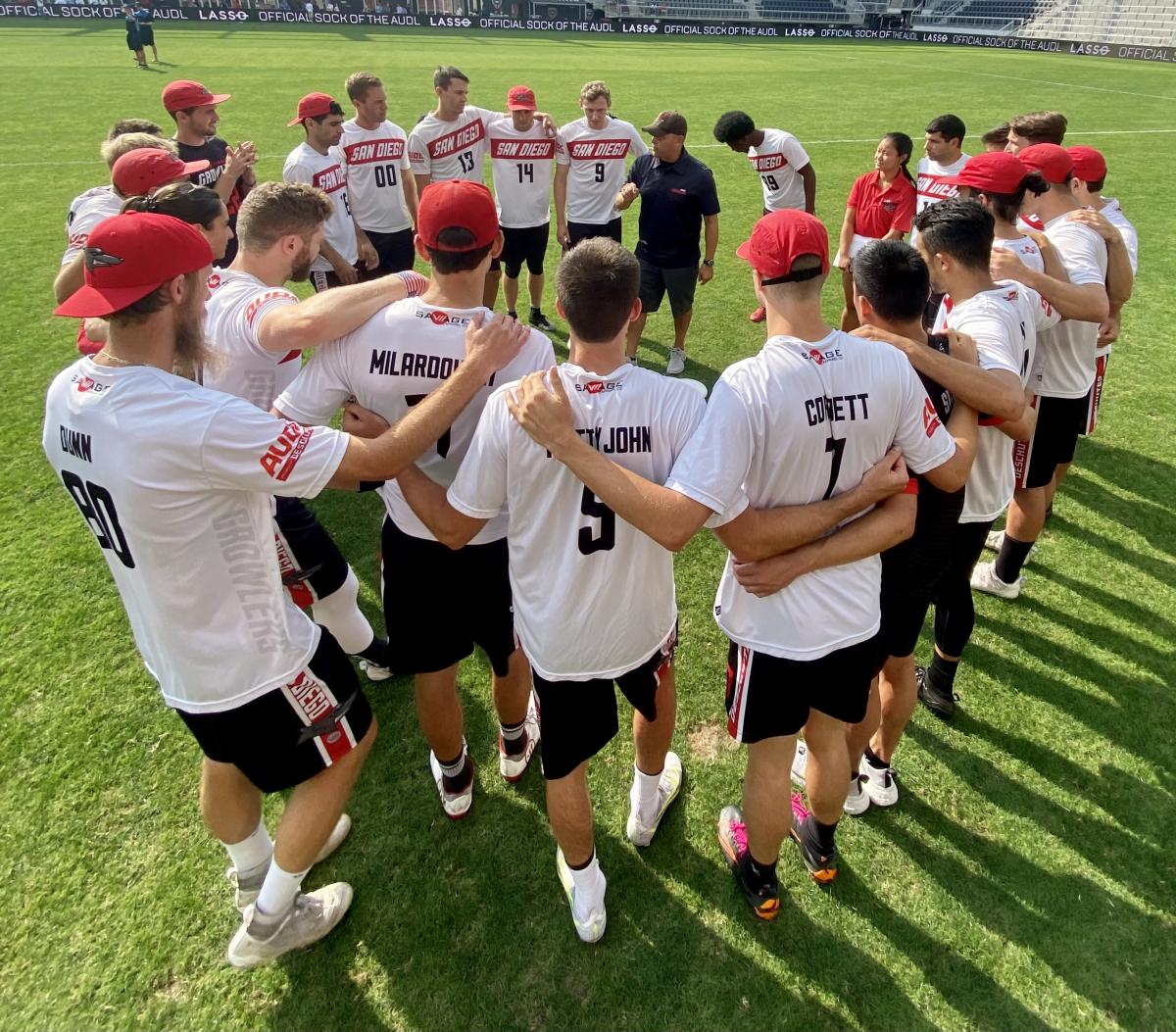 New York started the game with a highlight reel catch, San Diego answered, but the Empire seized control early with a hold and a break, 3-1. After a Jonathan Nethercutt scoober to Nate Pettyjohn for a hold, the Growlers had their first chance to break, but NY scored the upwind hold. Jonathan Helton dialed up a flick assist to Paul Lally, but the Empire countered with a hold and hand block resulting in a break, 6-3. San Diego was patient and worked through the NY zone for the score, and Jeff Silverman registered a hand block of his own, leading to a Michael Tran to Hunter Corbett break, 6-5.  The Empire ended the quarter with momentum after a hold and a buzzer-beating break score following a Growlers miscue, 8-5.

An untimely Growlers throwaway led to an Empire timeout and eventual break to start the second quarter.  Tim Okita found Lior Givol for the hold, and then a long back and forth point ensued with seven total turnovers.  San Diego would finally prevail after Dom Leggio hit Lally with an inside break throw to get within two scores, 9-7.  New York proceeded to answer with a hold and took advantage of several San Diego turnovers to notch three consecutive breaks to pull ahead 13-7 at halftime.

The Empire continued to ride their momentum wave with a hold and another hand block yielding a break to extend their big lead to 15-7.  The Growlers answered and had a chance to break but NY held strong.  San Diego scored and deployed a sideline double-team defense which resulted in a turnover and a Khalif El-Salaam assist to Leggio for the break 16-10.  The Growlers sideline double-team forced another turnover but the team was unable to capitalize. Helton dished to Jesse Cohen for a hold, NY responded, then Travis Dunn threw a hammer to Pettyjohn for the goal, but the Empire scored before the quarter ended, 19-12.

San Diego found some confidence and energy with a Dunn to Corbett connection to start the fourth quarter. After a NY throwaway and a Growlers timeout, Corbett found Cohen for the break, 19-14. The teams traded scores, then a Jordan Queckboerner block led to a timeout and an offensive lineup substitution.  But once again, San Diego had a costly turnover and New York made them pay with a dagger hold, 21-16.  The teams traded with time becoming a huge factor, and the Growlers earned one more break with a Will Turner dish to Queckboerner with two minutes left.  New York was content to run the rest of the clock out and emerged with a convincing 22-18 win to advance to the Championship Final.

It was an abrubt and disappointing way to end a largely successful season for the 11-3 West Division Champion Growlers, but they will no doubt be fueled by this loss and come back hungry for more in 2022.