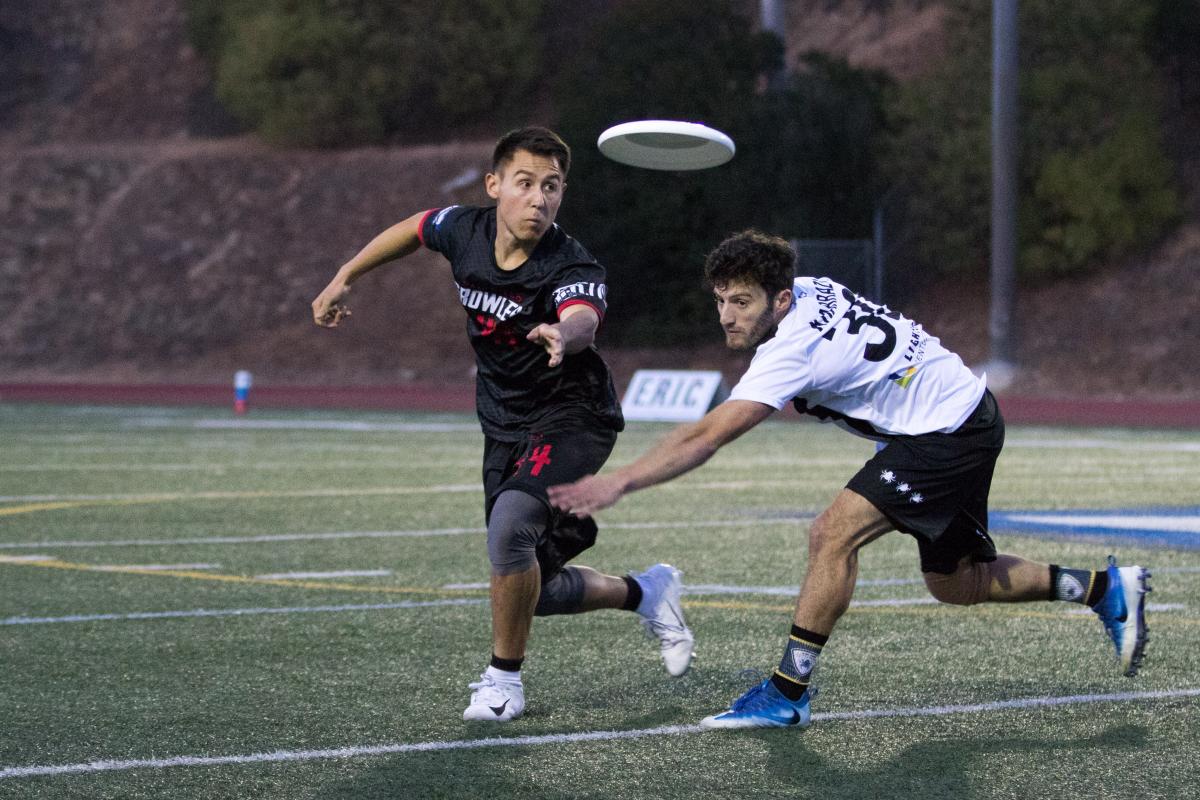 The San Diego Growlers traveled to windy San Jose to take on the San Jose Spiders in a rematch of the previous week. San Diego started the game with an easy downwind hold, an upwind break initiated by a shoulder-high Will Turner layout block, and another downwind break when Sam Fontaine made a huge, highlight-reel, trailing-edge, layout catch for an early 3-0 lead. The Spiders got on the board with a downwind score, but the Growlers held upwind and rattled off two more breaks to go up 6-1. San Jose held and earned their first break of the quarter, but Mark Slader’s backhand rip on the next point found Travis Dunn as the buzzer sounded, 7-3.

The Spiders scored their first offensive point after a multiple turnover possession and doubled down with a break to climb back into the game, 7-5. After upwind trading, and a skying grab from Ryo Senda, San Jose took advantage of a short field turnover and inched to within one score, down 8-7. After an easy offensive score from Dunn to Wes Groth, the Growlers notched another upwind break when Tim Okita squeezed a low flick into the sure hands of Dom Leggio, 10-7. More upwind offensive holds, then Marcel Osborne intercepted a pass and caught a bobbled, bookend score right before the end of the quarter, 12-8.

Coming out of halftime, San Jose needed a spark and found it with a block and a break score, but after multiple turnovers, Fontaine’s smooth upwind flick huck to Dunn put the score at 13-9. The Spiders held going downwind, then scored two consecutive breaks to pull within one, 13-12. After a timeout to stop the bleeding and to take a deep breath, the Growlers offense held on the next point and maintained a 14-12 lead after three quarters of play.

Both teams traded two offensive holds to start the fourth quarter until San Diego took advantage of a couple Spiders’ throwaways and converted on key breaks to surge ahead 18-14 with 6 minutes remaining. The clock was San Jose’s main enemy at this stage, and minutes continued to dwindle as both teams traded offensive holds. San Diego secured one last break and earned their first ever victory on the road in San Jose by the score of 21-16! The Growlers were led by Tim Okita at +7 (5 assists, 2 goals, 0 turnovers), Travis Dunn with +6 (5 assists, 3 goals, 2 turnovers), and Will Turner at +5 (2 assists, 1 goal, 3 blocks, 1 turnover). San Diego is 3-0 to start the 2019 season and is currently in first place in the West Division. The Growlers will host the Seattle Cascades on Friday, April 26 at Mira Mesa HS at 7 pm.