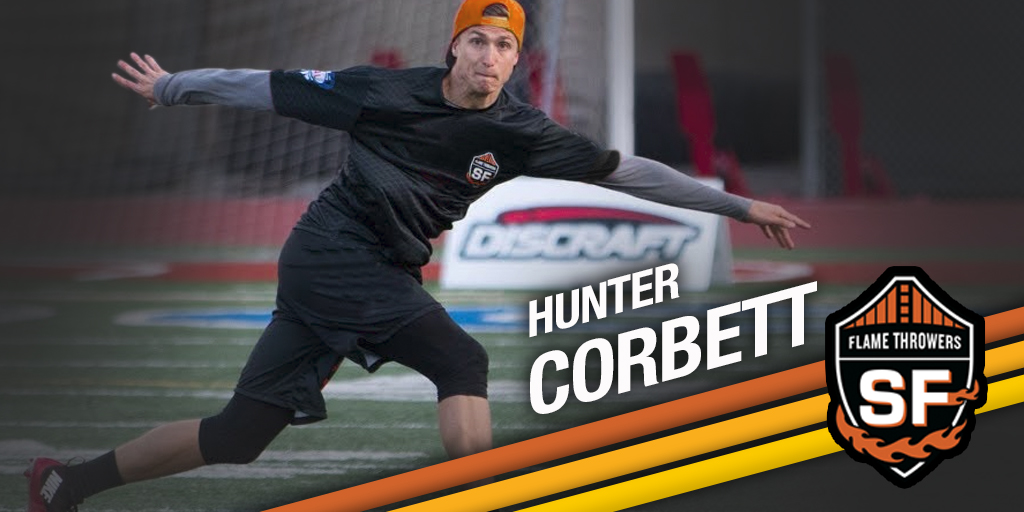 Another big signing for the 2018 season, Hunter Corbett is a rookie on the FlameThrowers but has three years of professional ultimate experience under his belt – not to mention a gold medal from the 2015 U23 world championship with the USA men’s team. The 6’2” athlete was named Southwest Player of the Year that same year. As a member of UC Santa Barbara Black Tide from 2011 – 2015, the SoCal Condors from 2013 – 2017, the Los Angeles Aviators in 2015 and their captain in 2016, and the San Diego Growlers in 2017, he has no shortage of elite ultimate experience. Read up on him below!

Where are you from originally?

What did you study at UCSB?

I focused on Technology Management in school - I work in Software, which prompted my move to the Bay. Outside of work, I spearfish and lobster dive as much as I can - I'm an avid fisherman.

How did you first discover ultimate?

My older cousin Sam Corbett played at Davis and went on to play for club teams in Virginia and California with his wife, Ginny. They got me into Ultimate.

What influenced your decision to try out for the FlameThrowers?

Besides moving to the Bay Area for work, it was to play with some great players on this team - it was a no brainer.

What are your goals for the FlameThrowers in 2018?

Play to our full potential every point, every quarter, every game.

Will you be playing with any other teams this spring / summer? If so, which teams?

Trying out for Revolver.

What would you like to tell fans attending your upcoming games?

Can you tell us a personal highlight from last year?

Being named player of the week last year when playing against my former team felt pretty great.

What's something you'd like your future teammates to know about you?

I'm not yelling at them, I'm yelling to them.

What is your current pregame pump up song?

GLOWED UP by Kaytranada & Anderson .Paak